How is the music computed?

FractMus uses two counters (see figure) as an iteration control for the algorithms. Melodies are always played from the Start counter, which counts in thirty-second notes. The End counter marks the point were the music stops. An example: Let's assume a note value of quarters (8 thirty-seconds) and the Henon algorithm. We start at counter 0, that is the first iteration of the algorithm (the first note), next, since we have chosen quarters as the note value, which corresponds to 8 thirty-seconds, we must wait until counter 8 to play the next note (iteration 2), then 16, then, 24, and so forth. Some algorithms are two dimensional maps, such as the Henon, Gingerbread man fractal, etc. As such, these equations give back (X, Y) values when iterated. In order to get a unique value from these coordinates, a modulus operation is performed, that is, the square root of the sum of the values squared [ sqrt(X*X + Y*Y) ]. From this value the final note is computed, depending on the scale chosen, the number of octaves, etc. The Reset button will set both counters to 0. The Round button will set the counters to the nearest multiple (up or down) of the value of the voice of your choice (a dialog will pop up for you to choose the voice). Normally, when you play in the Current Settings mode, the End counter will start running from the value of the Start counter until you stop. If you do not want the End counter to run, press the Lock button. The music will stop automatically when the value at the End counter is reached. Counters can have a maximum value of 50000.

FractMus has sixteen-voice multitimbral polyphony. Each voice can be assigned to one of the sixteen midi channels (percussion channel is usually channel 9). Voices can be assigned instruments, dynamics, speaker output, algorithms, scales, note durations, etc, completely independent from each other. You can easily toggle voices on/off by pushing the voice buttons. 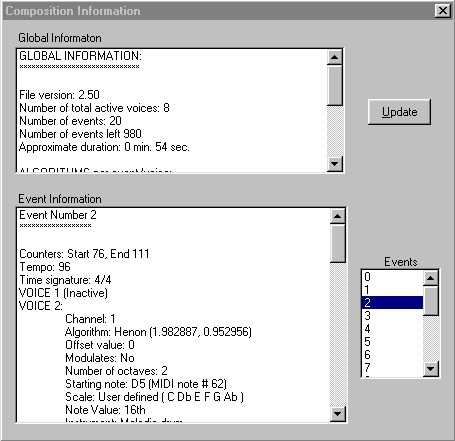 FractMus provides you with an information window about your composition. It includes general information such as approximate duration, scales used, algorithms used, file version, etc.

FractMus offers you 15 pre-defined scales to choose from and the possibility to create your own. Built in scales include (click on the scale to listen):
To create your own scale select "user scale" from the scale combo box. A dialog will pop up with 12 checkboxes, one for every note. User scales are pre-defined to a default Major scale when first accessed. Simply check the notes that form your scale. You can create scales with any number of pitches, from 1 to all 11 notes. Note that FractMus transposes all scales to C, thus, for example, a scale defined as E - F - Ab - Bb - B will be transposed (and shown) as C - Db - E - Gb - G.

FractMus provides 11 pre-defined note durations. These are (from longest to shortest):

You can also define your own note-duration. Just select "other" from the combo box. A dialog will pop up. Enter the value of the duration (1=thirty second, 2=sixteenth, 3=dotted sixteenth, 8=quarter (8 thirty seconds), 10=quarter + sixteenth, etc).

The tempo marking controls how fast your composition goes. It is measured in quarter notes per minute. Basically works as a metronome, the higher the value the faster your music will sound. Values are between 20 and 320. Note that unless you have a really fast computer, your tempo marking may not corresponds with the playing speed (it may be noticeably slower). This happens because FractMus computes the music in real time. Nevertheless, when you save the midi-file the tempo will be correct. The Global Tempo button allows you to change the tempo globally for the whole composition (every Event's tempo will be modified).

The time signature is a very useful feature if you import your midi files into a music editing program (such as Finale or Sibelius). The numerator is the number of values per measure. The denominator represents the base value of the measure, it must be a power of 2 (1 represents whole, 2 half, 4 quarter, etc). The Global button allows you to change the time signature globally for the whole composition (every Event's time signature will be modified). The time signature has no effect on how the music sounds.

Inverting a melody is a compositional procedure in which the direction of intervals in the melody is reversed, for example: a fifth up becomes a fifth down, a second down becomes a second up, etc. For simplicity, FractMus inverts "from C", that is, taking the note C as the pivot note for the inversion. When you invert a melody, its original key will change. Nevertheless, you can force the inverted melody to remain in the same key as the original melody by checking Match Scale:   Note that if you force an inverted melody to remain in the key of the original melody, some intervals will not be preserved (although the direction of those will still be opposite).

Modulation is a procedure were a melody changes from one key to another. In FractMus you can modulate in two different ways. First you can have the melody to modulate every N notes. To do so, simply specify N in the Every edit box (values are between 1 and 50). The other option is to let the computer choose N randomly (from 1 to 50), to do so just select Random. The actual key were the melody modulates depends on the algorithm and the value generated at the point of modulation. Melodies can modulate from a minor second to a major seventh, that is, the whole chromatic range.

You can control the dynamic volume (midi velocity) of the voices independently for every voice.  Choose from PP (softest) to FF (loudest).

Output can be directed to the left (-64), right (63), or both speakers (0) for each voice independently. Use the scroll bar to select desired output. You can also press the 0 button to select both speakers.